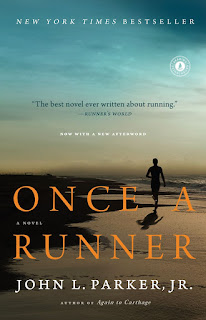 I'm almost finished reading John L. Parker, Jr.'s classic, 1978 novel Once A Runner.  It's a must-read novel for anyone who identifies as a runner.  One review describes it as,

Part training manual, part religious tract, part love story, and all about running, Once a Runner is so inspiring it could be banned as a performance-enhancing drug" (Benjamin Cheever, Runner's World).

I've laughed out loud, I've cried, and I've gone into more than one run with renewed love and inspiration.
Tuesdays are my speed work days.  The other day, I read a passage from the book that perfectly described how I feel about speed work:

"An interval workout," Cassidy once explained to a sportswriter, "is the modern distance runner's equivalent of the once popular Iron Maiden, a device as you know used by ancient Truth Seekers."  Although over distance laid the foundation, intervals made the runner racing mean.  Quenton Cassidy liked them.  Others preferred bamboo splinters under their nails.  Cassidy figured that a natural affinity for interval work was the difference between those who liked to race and those who liked to train.  And there is a difference.  Racers express little enchantment with training for its own sake. (Parker, p. 216)

When the intervals get tough, I just think to myself, "Racing mean, baby girl.  Racing mean."
Posted by Megan Warzecha at 7:21 AM